All his life John Baptist Scalabrini was clear about his goal, heaven, and the way to get there, charity. A bishop, founder of two congregations, the Missionaries and the Sisters of St. Charles Borromeo, Scalabrini was first and foremost a man in love with God, capable of seeing in the least the gaze of Jesus.

Born in Fino Mornasco, in the province of Como, on July 8, 1839, to a humble and religious family, he was the third of eight children. At age 18, in 1857, he entered the seminary and after six years was ordained a priest on May 30, 1863. His desire was to go on a mission, but he was not granted: he began his apostolate as a teacher and then rector of the minor seminary in Como, a position he held until 1870. In the same year he was appointed pastor of St. Bartholomew Parish in Como. Attentive to all social issues, he personally treated cholera patients in Portichetto, receiving a civilian medal for valor. In those years Scalabrini sensed the importance of religious education of the youngest: he wrote the Small Catechism for Kindergartens.

At the age of only 36, Pope Pius IX elected him bishop of Piacenza on December 13, 1875. In his pastoral program and early initiatives, we get a glimpse of what his ministry would be: closeness to the people, attention to the clergy, teaching of the Gospel, and charity toward those most in need. He devoted himself to the formation of priests and young seminarians; founded the Schools of Christian Doctrine and published the magazine “The Catholic Catechist.” He established the Institute for the Deaf and Mute, entrusted in 1874 to the Daughters of St. Anne, and the Opera pro mondariso for the religious, social and union assistance of the approximately 170,000 seasonal migrants employed in rice growing in Piedmont and Lombardy.

Deeply affected by the plight of his faithful forced to make their fortunes in South America and the United States, on November 28, 1887, he founded the Congregation of the Missionaries of St. Charles Borromeo for the spiritual and material assistance of migrants. Two years later, in 1889 he established the Lay Association “St. Raphael,” and in 1895 he joined the Missionaries with the Missionary Sisters of St. Charles Borromeo. In 1901 he arrived in the United States and in 1904 in Brazil to visit the missions of his Scalabrinian brothers. Returning from his last trip, he fell ill and died on June 1, 1905, the feast of Jesus’ Ascension into heaven. He was proclaimed blessed by Pope John Paul II on November 9, 1997.

“Deeply in love with God and extraordinarily devoted to the Eucharist, he was able to translate contemplation of God and his mystery into intense apostolic and missionary action, making himself all things to all people in order to proclaim the Gospel.” 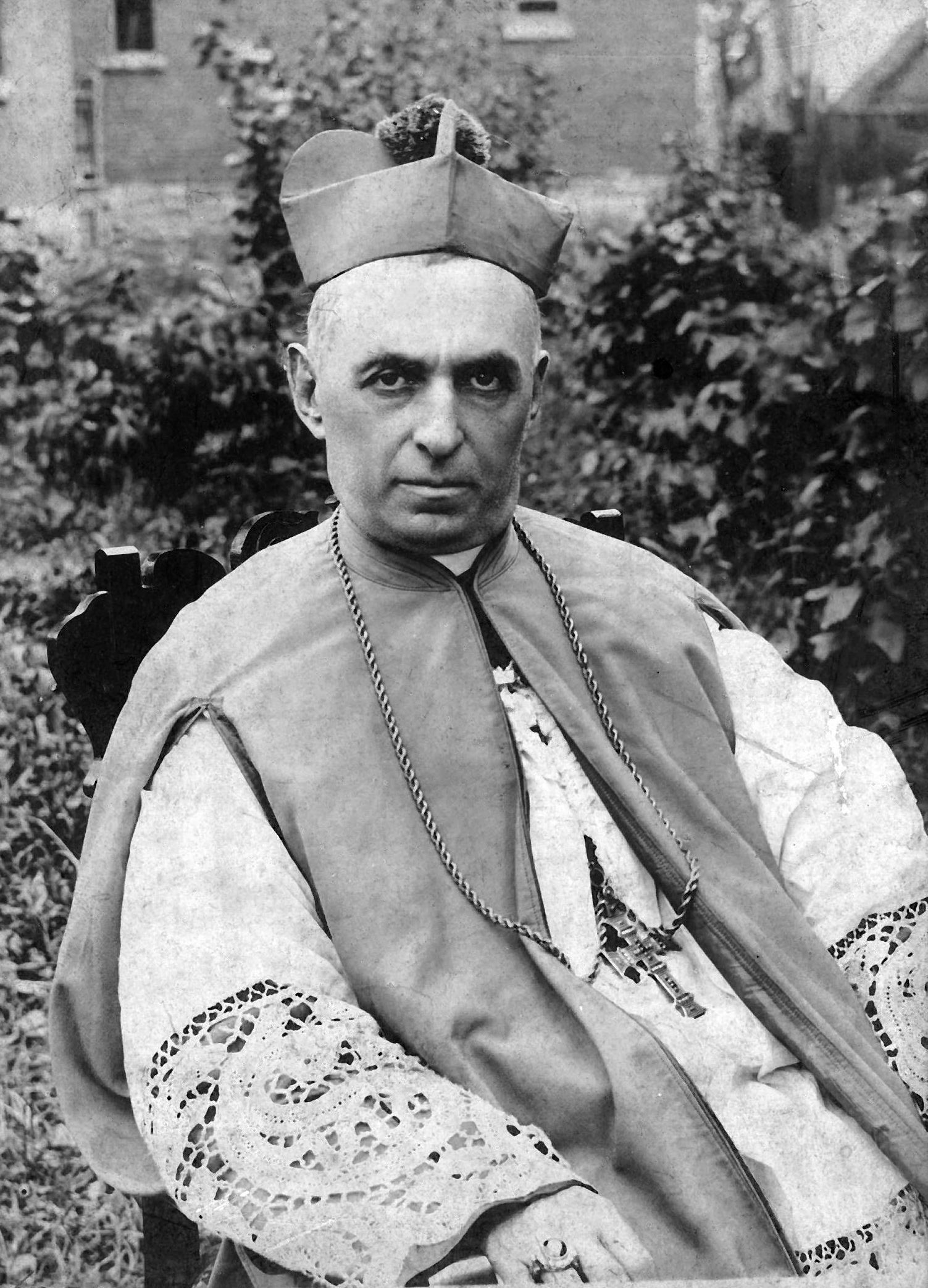 The Bishop of All

“I will not recuse myself from labors to make myself a father to the unfortunate, a tutor to the ignorant, a rector to the priests, a pastor to all, that made thus all to all, I may win all to Christ.”

At the age of only 36, Giovanni Battista Scalabrini was elected bishop of Piacenza by Pope Pius IX on December 13, 1875. He initially wanted to refuse the appointment, but, as he writes in his first pastoral letter, “with fear and trembling but resigned, I submitted to the ministry imposed on me” . Scalabrini founded his 29-year-long ministry on two pillars: charity toward the most needy and spreading the faith through the teaching of Christian doctrine.

“Preach the truth with charity”: to this motto he remained faithful throughout his episcopate. He knew the importance of communication and took advantage of the means of the time to spread faith in Jesus Christ: in 1876 he inaugurated the monthly magazine “The Catholic Catechist.” Three years after the beginning of his ministry, there were 4,000 new catechists in the diocese. This is why Pope Pius IX, in giving him his pectoral cross, called him an Apostle of the Catechism.

He celebrated three diocesan synods, consecrated 200 churches and sent sixty pastoral letters. But the “most cherished of offices,” as Scalabrini calls it, are pastoral visits to the 364 parishes in his diocese. He reached the faithful, many living in small mountain and hill towns, by traveling on the back of a mule. He visited prisons and kindergartens. As a bishop, he stayed close to his people, he knew their needs and anticipated them. He did not forget his missionaries and emigrant parishioners: on July 18, 1901, he left Genoa for what was his first overseas pastoral visit to Italians in the United States of America. On June 13, 1904 he completed the second, visiting Italian communities in Brazil.

A father for migrants

“I myself more than once had to witness at the station in Piacenza the departure of emigrants, and I confess that, on seeing their misery and pain, at the thought of the very serious evils without number which they were going to meet, at the idea of the abandonment in which they would be left without any spiritual help, I felt my heart clench, and wept over their fate, and made a firm decision in my mind to try something.”

From 1875 to 1915 nearly 9 million Italians emigrated, heading first to Brazil and Argentina, then to the United States. Scalabrini, who had always been attentive to the needs of his faithful, studied the phenomenon and discovered that 12 percent of his parishioners were abroad. But he was not concerned only with their material needs: in fact, uprooted from their cultural context, many Italian migrants lost their faith:

“A few days ago a young traveler brought me the greetings of several families from the mountains of Piacenza camping on the banks of the Orinoco River: Tell our bishop that we always remember his advice, that he should pray for us and send us a priest, because here we live and die like beasts… that greeting from the distant children sounded to me like a reproach.”

The step from compassion to action in Scalabrini’s soul is a short one: “I took up the cry of pain of our poor expatriates, and called the public’s attention to the nefarious work of human flesh traffickers.”

He thus began to think of an institutional way to help migrants. In 1887 he presented to the Sacred Congregation de Propaganda Fide the project of an association for the spiritual and material assistance of Italians abroad. Leo XIII approved the establishment of missionaries for immigrants, and on Nov. 28, 1887, the Congregation of the Missionaries of St. Charles Borromeo was born in Piacenza. Scalabrini decided to entrust the mission to the protection of St. Charles, the bishop of Milan who took to the streets in 1576 to comfort the plague-stricken sick, risking his own life.

On July 12, 1888, the first ten missionaries left for Brazil and the United States. In addition to the congregation, Scalabrini founded in 1889 the St. Raphael Patronage Association for Emigrants, a lay institution with the task of being present at ports of embarkation and disembarkation. In fact, Scalabrini organized all-around assistance to migrants so that his missionaries and lay collaborators could be of help and support at every stage of the migration process: at ports, on the ship, upon arrival in new countries and in the months to follow, during the acclimatization period. To help emigrants before departure, he established Emigration Committees or Patronages in 19 Italian cities.

Scalabrini often repeated “The work of the Missionaries would be incomplete, especially in South America, without the help of the Sisters,” . In 1889 he had encouraged St. Frances Xavier Cabrini to go to the Americas and gave her the crucifix in Codogno. Finally, on Oct. 25, 1895, he also founded the Congregation of the Missionary Sisters of St. Charles Borromeo.

Scalabrini visited missionaries and migrants in the United States in 1901 and in Brazil in 1904. He suggested to St. Pius X the establishment of a body, at the Holy See, for the care of all migrants in the world, a suggestion that the Holy Pontiff put into action with the establishment of the Special Office for Emigration, the forerunner of today’s Pontifical Council for the Pastoral Care of Migrants and Itinerant People.

As Blessed Giuseppe Toniolo said of him, Scalabrini had “the intuition of events to come.” Throughout his life, he walked humbly, with a far-sighted gaze, allowing himself to be questioned by migrant humanity, convinced that God acts in history with them and through them with infinite fatherly love.

Building the future
with migrants and refugees